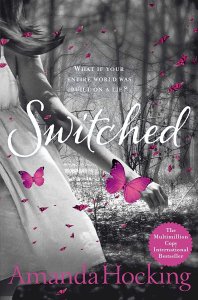 Wendy Everly knew she was different the day her mother tried to kill her and accused her of having been switched at birth. Although certain she’s not the monster her mother claimed she is, she does feel that she doesn’t quite fit in.

She’s bored and frustrated by her small-town life – and then there’s the secret she can’t tell anyone. Her mysterious ability – she can influence people’s decisions, without knowing how, or why . . .

When the intense and darkly handsome newcomer Finn suddenly turns up at her bedroom window one night, her world is turned upside down. He holds the key to her past, the answers to her strange powers and is the doorway to a place she never imagined could exist: Förening, the home of the Trylle.

Finally everything makes sense. Among the Trylle she is not just different, but special. But what marks her out as chosen for greatness in this world also places her in grave danger. With everything around her changing, Finn is the only person she can trust. But dark forces are conspiring – not only to separate them, but to see the downfall of everything that Wendy cares about.

The fate of Förening rests in Wendy’s hands, and the decisions she and Finn make could change all their lives forever . . .

I had read Hocking’s Hollowland, but none of the Trylle series. The reviews I had seen were extremely mixed, but I like to judge for myself. I’m sat firmly in the middle ground with 3/5 stars. I liked this read, but did not love it. Hollowland was much more my cup of tea.

I’m not a reader who dislikes a well placed genre trope if done well. This book is full of tropes; some work, some felt outdated. The latter made Wendy seem a little ‘damsel in distressy’ for my taste. Stand up for yourself a little more, girl.

I did like the troll/ changeling concept, and the dynamics between the various characters. I want to know more about the Trylle and their lifestyle/ history, so I will be continuing on with this series. Plus, a friend told me to plough through book one as book two is much more satisfying.