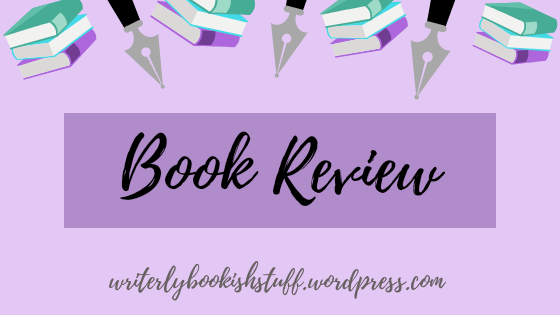 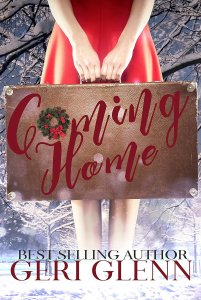 It’s a tried and tested narrative of a teen running away with her rebel boyfriend and them both returning years later to win back the love of her parents, but that’s not a negative. I like a little cliche when it is written well.

This is a short, Christmas read with a feel good ending. As they say, all’s well that ends well.

The snowglobe by Kristin Harmel 5/5 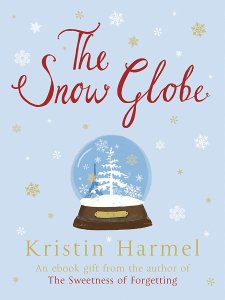 Poignant and moving tale of a Jewish boy meeting a Jewish girl on Christmas eve in Nazi occupied France and falling in love.

It is well written and takes us on a long journey in few pages. From Paris to Auschwitz concentration camp. I could have continued reading. 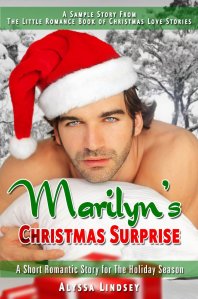 This is a light hearted, Christmas read about love at first sight. There are stereotypical tropes, but I do expect that with Christmas romances. However, it is well written.

The only part I didn’t connect with is the kissing your sister’s boyfriend. Not acceptable in my book, even if it’s love at first sight. I no longer related to the characters afterward. We also didn’t learn what Amber thought of them getting together after she split with Brett. 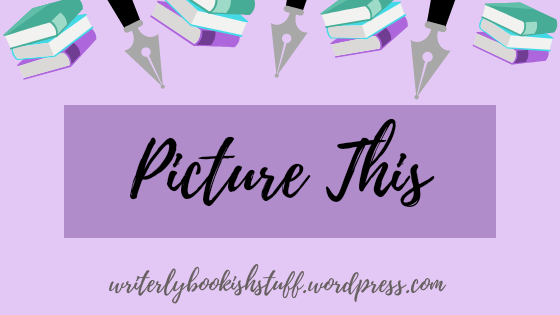 Welcome back for another Picture This post. Please, feel free to join in with your own interpretation of the prompt. Be sure to tag me in your post, so I can have a read or leave it in the comments. 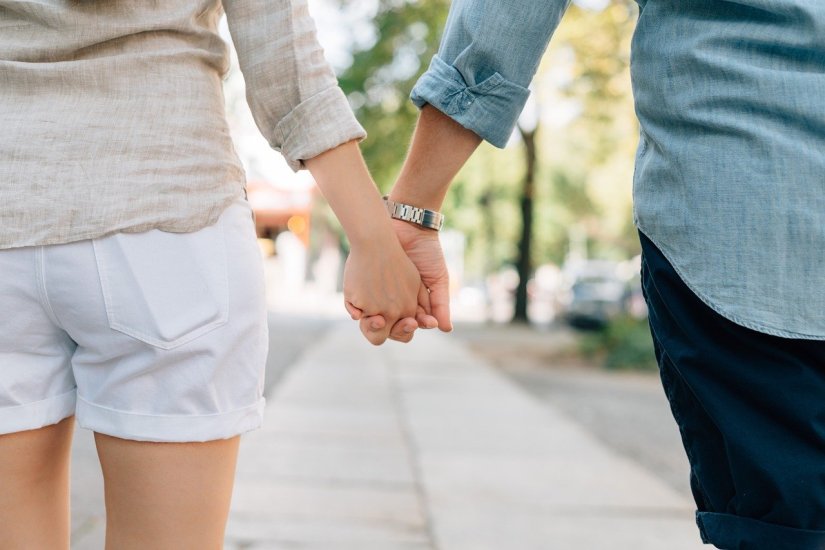 I should have paid more attention to when he held my hand. That may sound silly and trivial, but looking back, it was vital.

The first time he held my hand was when I accompnaied him on his business trip to London. I thought it was sweet, walking down the road hand in hand, making a point of our love to those passing by.

But a pattern quickly was established. He took me on a mini break to Scotland and his hand never left mine. A long weekend in the Lake District. Two nights in a cottage in Cornwall. He was so much more affectionate then… when we weren’t at home.

I did notice, but I put it down to him not wanting to be affectionate in front of people he knew. I mean, he was a private man, very private it seems. Still, I should have paid more attention, but you know how those rose tinted glasses can be.

Of course, there were other signs I missed, but the hand holding thing now bugs me and taunts me, letting me know I was a fool.

However, I was ignorant until the last sign – the smack in the guts sign- the sign that finally knocked those glasses clean off my face. Well, perhaps not so much a sign as a nasty, devastating realisation. 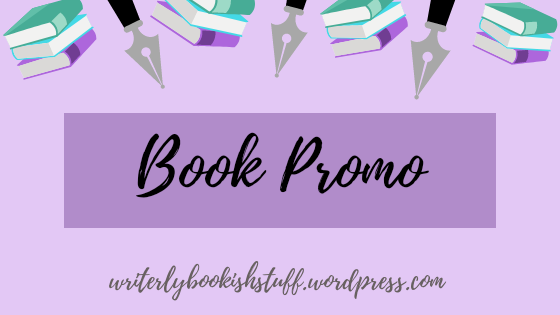 I’m thrilled to welcome more new followers to Writerly Bookish Stuff, and this 4 week promo series of my books couldn’t have come at a better time. My second, official blog series starts on April 10th, so I had 4 weeks spare to get a little shameless self promotion posts out there.

First up is my trilogy of books, my first complete series, EVO Nation Series.

You can find my books on my Amazon author page. And guess what???? I have a massive promo running. EVO Nation is free for five days (13th- 17th). Go and grab your copy! 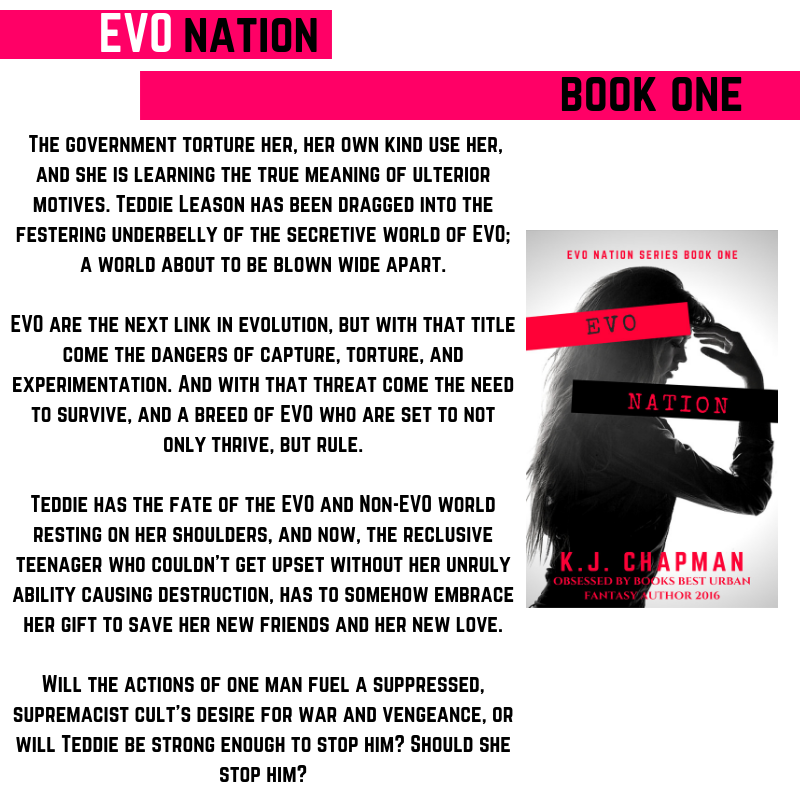 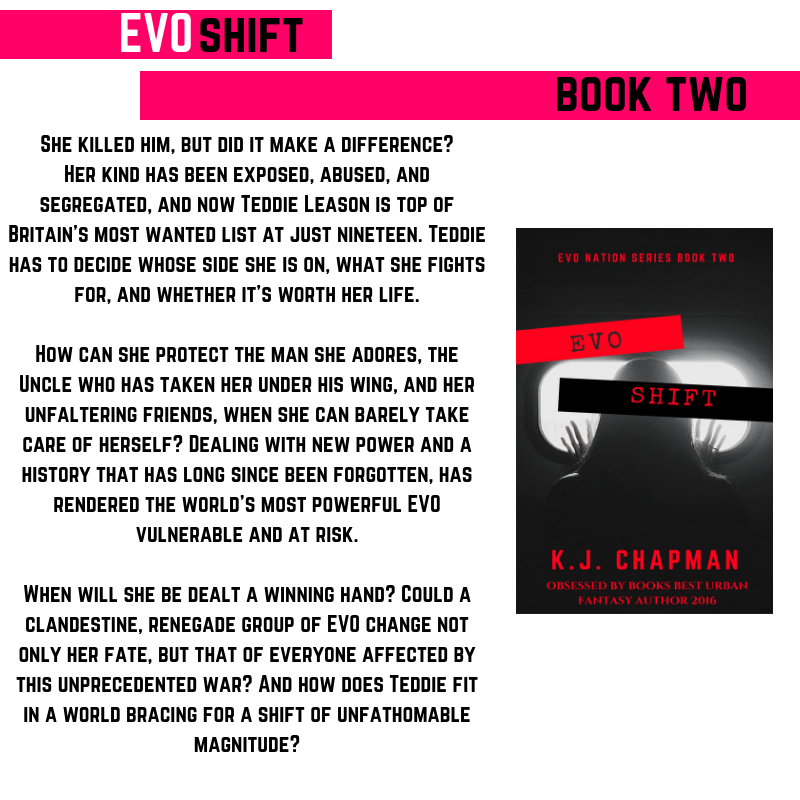 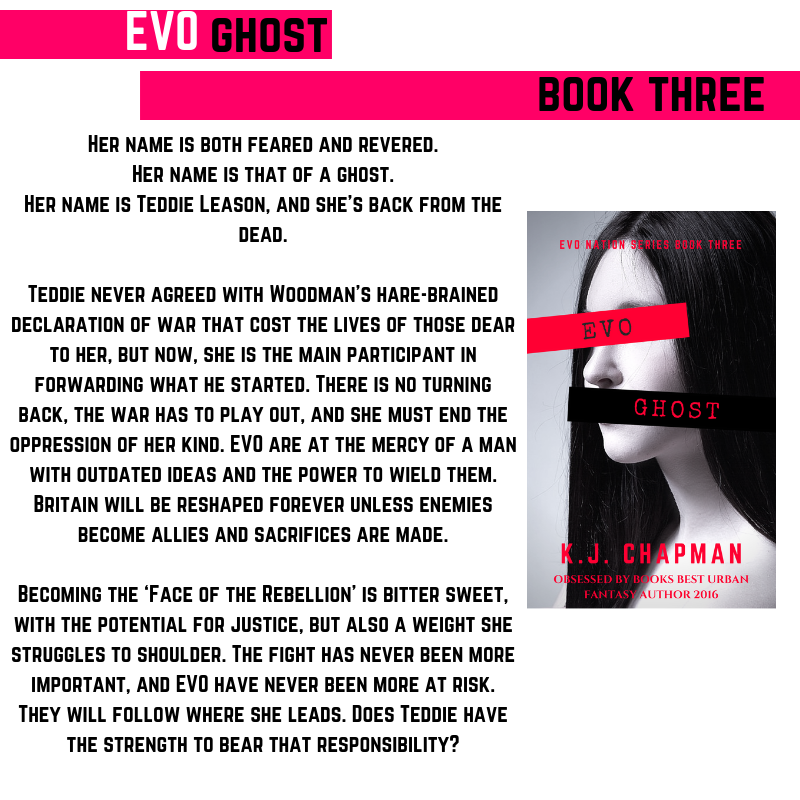 This series will always hold a special place in my heart as it is my first completed series. I love my characters, and ending book 3 felt like I was saying goodbye to good friends.

‘K.J.Chapman has done what I was afraid to attempt, and the results were pretty spectacular.’ – Goodreads review.

‘The themes explored add a depth to this story while the narrative grips from start to finish unapologetically.’ – Goodreads review.

‘I absolutely love this book!!! I could not put it down and read it in two sittings.‘ – Amazon review.

‘An amazingly written novel that drew me in with both an incredible writing style and captivating story line.’ – Amazon review. 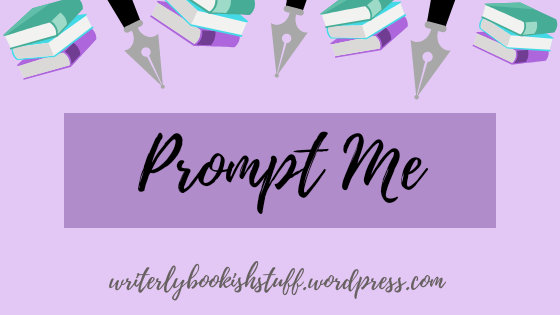 Did you know that I have published a writing prompt ebook? Prompt Me was published in 2016. You can get a copy for just 99p from Amazon for the 10 weeks that this blog series is running. 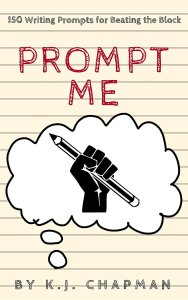 So, what is this blog series? This series is all about Prompt Me. Each week, I shall choose one of the one hundred and fifty prompts from the book and expand on it.

I invite you to join in with this series on your blog/ social media each week, and I would love to feature a snippet of your interpretations on Writerly Bookish Stuff with links to send my readers your way.

Okie doke, that’s the info side of things, now on with the show…

‘In total, sixteen ships came to rescue us. That meant that only sixteen thousand humans had survived the death of Earth.’

“Just be grateful that you are here,” Josh hisses. My brother would do anything to avoid confrontation, even when he just watched the destruction of our home planet at the hands of our apparent rescuers.

I turn away from the viewing gallery and the nothing that was Earth. “I’m sorry that I can’t feel gratitude toward the people… aliens who just annihilated my home.”

An alien soldier glances our way, and Josh nudges me to shut up. I still can’t get over how similar, and yet, dissimilar we look to them. They are humanoid, but their eyes are larger and the pupils cover nearly eighty percent of the eyeball. When they talk, they talk in every Earthen language, but I’ve never heard their own.

“English speaking evacuees are to follow me,” calls an incredibly pale skinned alien. His ginger hair is a shock against his complexion.

“What happens now?” an angry voice calls out from the crowd. “Why are we even here?”

The soldier stands firm, hands clasped behind his back. “Preservation, Sir. Were you aware that Earthens had approximately one hundred and eighty nine days left before the core of your planet finally stopped rotating? The Federated Collective of Worlds felt it best for the preservation of your species that a percentage of humans be evacuated before the humane termination of life.”

“Humane termination?” I shout in reply, much to Josh’s dismay. “What was humane about killing eight billion people!” I jab a finger at the viewing gallery, purposefully avoiding looking at the empty space.

“Shut up, Lewie!” Josh mutters under his breath.

The alien soldier makes his way slowly toward me, the crowd parting like the Red Sea in fear. “Do you know what would have happened? First, the core slows down- stops, then the magnetic field disappears exposing you to solar winds that would rip away Earth’s atmosphere. If you want a clearer description just think of the planet Mars in this solar system. What you have just witnessed was a kindness.”

“You don’t know that for sure. How could you? We could have thought up a way to stop it… to fix it!”

The soldier laughs. “Even Earth’s governments knew about it and knew there was nothing they could do. Now, I suggest you get onboard with everything that has just happened and be grateful–”

“Yes, grateful.” The soldier steps closer still, staring me down with those freaky eyes. “I have been on this craft for eighteen months to prevent the extinction of your species. There is an eighteen month journey back to where you will be relocated. That is three years away from my family. So, you will show me and every other member of this crew gratitude!” He turns to his colleague in a rage. “Get them to processing.”

Josh taps the soldier’s forearm, making him bristle. “It’s just hard, you know. That was our home.” His meek, sorrowful voice makes my eyes prickle with tears.

The soldier’s face softens as he rests a hand on Josh’s shoulder. “I do understand, honestly I do. We all do. This entire crew has been right in your shoes. It gets easier, but first, you’ve got to learn to accept it for what it is.”

His eyes, although softer, bore into mine. I simply nod my head in acceptance. What else can I do? Its not like I can go home.

Remember, if you are joining in with this series, let me know in the comments, and tag me in your posts (whether they be blog or social media) to let me have a read of your interpretation. It can be anything from just a paragraph to a short story like mine.

Not only is Prompt Me just 99p for the ten weeks this series is running, my fantasy book, Thrown to the Blue, is currently free for 5 days from Amazon. Think of it as a New Years pressie from me to you. 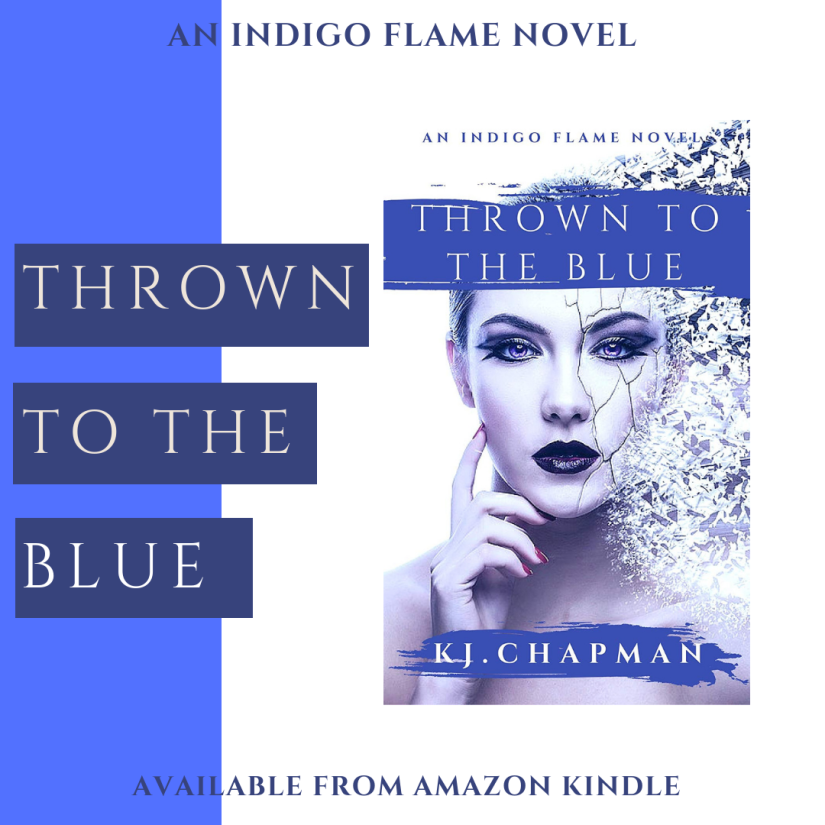 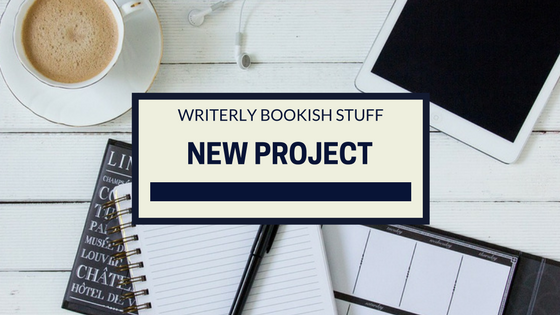 With EVO Ghost in the hands of the ARC readers and ready for release on March 1st, I was expecting to crack on with book two of the Indigo Flame Series, The Red Archer. I’m not in the mood to be writing high fantasy, so I decided to make some notes on another urban fantasy that has been niggling at me for a while. The notes gathered in momentum, and I’m well into the writing process.

About my new project:

This project is an urban fantasy based around five sisters. There will be five novellas, each from one sister’s perspective, and all leading up to a full length novel with all of their POVs. Despite them being novellas, the sister’s stories require a lot of note-taking for various reasons. Each one does not lead into the next (the novellas can all be read out of order), but the full novel will be a sequel to the five novellas.

All five e-covers are currently under design. I have titles for all which will be revealed with the cover and blurb reveal, and the series will be called Sisters All.

I am taking a different approach with the release of the novellas: all five will be released at the same time. There are two reasons for this: 1. I like the idea of all five being available as they can be read out of order, and I know it’s going to take me much longer to write the sequel novel. 2. I am seven months pregnant and won’t have the time to deal with five publication events with a new baby.

The whole process is going to be flexible, relaxed, and in my own sweet time.