Have you been waiting patiently for the final Crimbo book shout out and giveaway? Of course you have! The winner of last week’s Cass Michaels giveaway was Laura Carter. Congratulations!

This week’s Crimbo book shout out is for a Christmas horror book, Merry Murder by Angel Gelique… 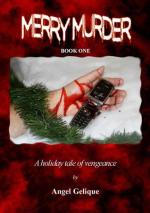 Poor Paul McKenna. He just wants to enjoy the holidays. But with an obstinate teen-aged daughter, Heather, and an unreasonable wife who enables her, Paul is anything but jolly. Heather has her heart set on getting the latest cell phone for Christmas. The only problem is Paul can’t find one within the acceptable price range. He simply refuses to fall victim to holiday price-gouging. He has every intention of buying the phone weeks after Christmas when it’s half the price. Surely, Heather will understand…right?

In this tale of vengeance, a well-intentioned father will find that sometimes it’s better to appease an incorrigible teen daughter—no matter the cost—rather than incur her wrath.

Would you like a chance to win an e-copy of Merry Murder? All you have to do is share Angel Gelique’s Amazon page via any social media platform and paste a copy of the link to your post in the comments below to be entered. You can also enter by sharing the post from my Instagram feed. You can find more information here.

You can find Angel Gelique and her books here:

Who’s ready for the second Crimbo book shout out post and giveaway? I know I am. The winner of last week’s K.C.Jane giveaway was Angel Gelique. Congratulations and happy reading.

Today’s shout out is for Chasing Winter by Cass Michaels.

I think Daddy needs a girlfriend. He needs someone to take care of him. She has to cook and like outdoor stuff. She has to like kids, ‘cause I have a little brother. And she has to be pretty, like the Christmas Princess. I love that movie! I want Daddy’s girlfriend to be nice like the princess and be good to everyone. She can’t be mean, like the Ice Queen!
Oh, and there’s another thing I want. I’ll tell you when I see you at the Christmas Pageant!

Grading the students’ papers, Noel Winter lays the child’s Christmas letter down on her desk and wonders exactly what surprises might be in store this Christmas… Jennifer’s father, Rex Presley, made quite an impression at Parent Conferences. And it had nothing to do with his plaid coat or ruggedly, handsome good looks. He’s got a chip on his shoulder, and his hands full, raising two kids on his own. So why can’t she stop thinking about him?

Would you like a chance to win an e-copy of Chasing Winter? All you have to do is share Cass Michaels’ Amazon page via any social media platform and paste a copy of the link to your post in the comments below to be entered. You can also enter by sharing the post from my Instagram feed. You can find the post here.

You can find Cass Michaels and her books here:

Welcome to the first of December’s Crimbo Book Shout Out posts. I had to add a little festivity to Writerly Bookish Stuff, and what better way than by highlighting some Christmas reads. There are even some simple to enter giveaways thrown in for good measure…

Today’s shout out is for K.C.Jane’s Christmas Novellas: With Bells On and The Christmas Riddle.

When her mother decides on secret santa gifts at the annual Christmas party, the Christmas holidays take an unexpected turn for Ronnie. Who would have given her an empty box with nothing more than a riddle inside, and why does the bizarre gift play on Ronnie’s mind?

Is there more to the gift than what meets the eye, and can she discover its hidden meaning in time for Christmas?

Mona is a perpetual singleton, but not for lack of trying. Is it simply bad luck, or her knack for finding herself in the most awkward, yet hilarious situations, that sees her romance-free at Christmas?

Maybe the right man isn’t out there. Or maybe she has been looking in the wrong place this whole time.

Could a game of bingo and a cantankerous Nanna lead Mona to her Christmas romance?

K.C. Jane has recently held a free promotion for both these books, but has generously offered to provide an e-copy of each book for the giveaway. All you have to do is share K.C.Jane’s Amazon page via any social media platform and paste a copy of the link to your post in the comments below to be entered. You can also enter by sharing the post from my Instagram feed. You can find more information here.

You can find K.C Jane and her books here:

A Beginner’s Guide to Christmas by Jennifer Joyce 3/5

A quick, christmassy read with humour and relatable characters. The christmas rules that kept popping up (pretty much after Ruth made mistakes or bad calls) were a hilarious touch. I didn’t understand the purpose of Gideon or why she was dating him, but the other characters made for a dynamic family.

Stories for Christmas by Various Authors 3/5

This book is advertised as a free sampler of Christmas stories, but I was shocked to find them imcomplete. It was just a marketing ploy to get the readers to buy the complete story which felt a little cheap. The stories were well written, but there wasn’t a huge Christmassy vibe about them. I won’t be buying the full stories.

An intriguing Christmas, romance mystery. The concept is well conceived and written, and you find yourself sucked into the story/era. There is a definite Dickens and Christie vibe to this story.

Santa Baby, I Want a Bad Boy for Christmas by Justine Elvira 3/5

Gunnar’s character stole the show in this book. I would have liked the book to have been from his POV. There are steamy scenes, but as for narrative, I wanted a little more believability. I don’t mind insta-love if done well, but a few nights together, and then declaring feelings felt forced.

You can’t go wrong with a Christmas read that involves a hunky fire-fighter. This story was a quick, steamy read, but that abrupt ending didn’t offer much in the way of a conclusion. Could have done with being longer.

Second Lieutenant Jonah Forrest is finding out that having infinite lives doesn’t make war any easier. Sure, downloading into a cloned body when you die is better than the alternative, but that doesn’t make a Hell-Spider’s claws hurt any less. Or his General’s orders for suicide missions any more sane.

But when his First Lieutenant gets killed in action, really killed, and when a captured Hell-Spider offers a way to get ‘kills’ without taking on the enemy, Forrest and his Infinity Squad will have to decide how hard they are willing to work to take the easy way out. Especially when the General starts catching on to their schemes. And when their Hell-Spider prisoner starts suggesting more and more dangerous alternative missions. And when they start suspecting that not ALL of their consciousness is transferring into their new cloned bodies.

Infinity Squad: Willing to die to free your planet from alien invaders. More than once if necessary.

Find Shuvom Ghose and his book:

Day 12 of my Indie Book Advent features The Aurora Stone by G.S.Tucker.

“An Elvish girl with changeable eyes will lose her family through the void. Three companions she will travel with. They will be identified by their gems. To get back what was lost, the Aurora stone must return to its home. In no more than a year and four days must this quest be completed, or the realms will be pulled into the void and lost.”

An ancient prophecy, a special gift and an epic adventure awaited Evangeline of Hermoria. On her 18th birthday Eve’s whole world is turned upside down. Learning of her long lost twin brother and the prophecy, she alone must fulfill. Eve sets out on the adventure of a lifetime. Battles are fought and friendships made, as Eve journeys through the realms of Orea. All the while a great evil is on her tail. It’s aim? To stop the prophecy coming to pass at any cost! Will Eve fulfill the prophecy and save all of Orea from the void? Will she ever find her twin brother? One thing Eve knows for sure, she will fight to the death and beyond to save her friends, and all that she holds dear.
After all darkness cannot survive where there is light.

Where to find G.S. Tucker and her book:

Day 9 of my Indie Book Advent features Dead by Morning by Kayla Krantz.

Obsession is deadly. No one learns that better than Luna Ketz, a pessimistic high school senior. She wishes more than anything to graduate but things don’t always go as planned. Luna quickly finds herself trapped in a web of lies and murders, spun by the least suspected person in her hometown. It’s not long before she realizes she’s being targeted by the person she despises most in the world. When Luna figures out who is behind the killings, things make a turn for the bizarre when she is contacted by a friend she has not heard from in years. It is then Luna realizes she is very much in danger, but although she can avoid the killer in reality, she cannot avoid him in her dreams.

Where to find Kayla Krantz and her book: