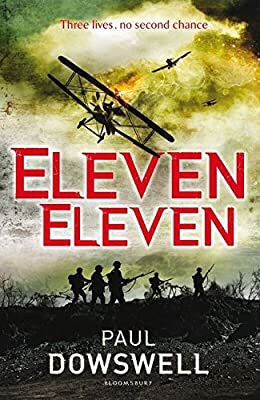 Set during the final 24 hours before the armistice at 11 a.m. on 11th November 1918, the story follows a German storm trooper, an American airman and a British Tommy. Their destinies converge during the death throes of the first ever conflict to spread across the globe. War becomes incredibly personal as nationality and geography cease to matter to each of these teenagers on the Western Front, and friendship becomes the defining aspect of their encounter. But who will live and who will die before the end of the day?

This story follows three men: two soldiers and a pilot in WW1. A German, a Brit, and an American. The story is told from the three points of view in the 6 hours after the Armistice was signed and the bigwigs involved decided the war would end 6 hours later at 11am.

What really got to me was the fact that so many lives were lost despite the war being over because it was decided that it would continue for another 6 hours.

Dowswell captures the sheer horror of war and horrific conditions both the Brits and German infantry had to endure. Delving into the mindset of men who are potentially one bullet or shell away from death was fascinating and upsetting to read.

I would recommend this book to anyone interested in wartime books as it has been researched well, and the narrative has been well developed.