Out of the Shadows by Dana Fraedrich 4.5/5 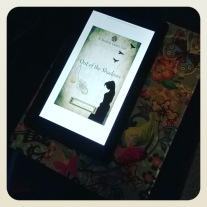 When the Allens rescue Lenore from certain torment, she’s offered a new life, a life that can save her from the underworld of crime in which she’s forced to live. The universe is keeping score, however, and Lenore isn’t the only one caught in this web of debt. Can she truly escape her past when it comes to find her or will she be drawn back into the darkness?

Homeless, orphaned, living in secret as a thief–Lenore Crowley just wants to survive, but the city of Springhaven has no sympathy for cases such as hers. She chose her path, and the consequences are hers alone. Being caught would mean certain death; her odds of survival are beginning to look bleak. When she meets the Allens, she’s offered a new life. In a world where debts and oaths carry very real weight, however, this second chance comes at a price. Lives entangle, and Lenore soon find that her secrets aren’t so secret. Someone is looking for her, someone who knows who she really is. One wrong move and everything around her might fall.

Steampunk is not usually my genre of choice, but after reading Jay Kristoff’s Stormdancer, I jumped at the chance to read Dana Fraedrich’s Out of the Shadows. Fraedrich’s worldbuilding is extensive. The world of enforcers, thieves, magic, oaths, the old world- new world dynamic, and the society, is carefully woven together to bring a strong visual and emotional element to the reader.

The characters were well-rounded and distinctive. Rook was the character to keep me intrigued, even more so than mysterious Kieran. No spoilers, but I like me some Rook. Lenore’s character had that anxious, never fully relaxed edge to her that suited her personality and circumstance brilliantly.

Fraedrich’s prose is smooth and easy to read. Questions are answered, and then more are peppered into the plot. I enjoy reads that don’t give everything away in one swoop. The sub plots running alongside Lenore’s main narrative were subtly guided along without hindering the reading experience. The pacing at the start was a little slow, and it took me a while to get into the meat of the story, but once you’re in, the pace picks up, and you’re sucked into Lenore’s world.

Do you like steampunk, strong main characters, and fabulous worldbuilding? Then, this is the book for you.