Girl of Myth and Legend by Giselle Simlett 3.5/5 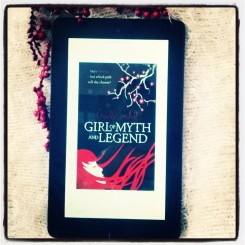 Blurb: Leonie Woodville wants to live an unremarkable life. She wants routine, she wants repetition, she wants predictability. So when she explodes in a blaze of light one morning on the way to her college, it’s enough to put a real crimp in her day.

And things only get weirder…

Leonie learns from her father that she is last of the Pulsar, a phenomenally powerful member of a magical species called the Chosen. It will be her sole duty to protect the Imperium, a governing hierarchy, from all enemies, and to exceed the reputation of the Pulsar before her. So – no pressure there, then.

Leonie is swept away from her rigorous normality and taken to a world of magic. There, she is forced into a ceremony to join her soul to a guardian, Korren, who is both incredibly handsome and intensely troubled, a relationship for which ‘it’s complicated’ just really doesn’t cut it.

But Leonie is soon to learn that this ancient world is no paradise. With violent dissidents intent to overthrow the Imperium, and dark entities with their own agenda, she and Korren find themselves caught in a war where they will have to overcome their differences if they are to survive.

Dare to dream. Dare to hope. Dare to be a legend.

Thanks go to WWS Publishing Limited and Netgalley for offering me a free copy of this book in exchange for my honest opinion.

Okay, so the ‘chosen one’ YA trope is pretty much the basis of the story, but did I like the concept? Yes! I was drawn in to the world building, magic, and the relationship between Leonie, a newly awakened Pulsar, the first to be born in many years, and Korren, a Kytaen who is soul-bound to Leonie as her protector.

The narrative was captivating, and understanding the politics, landscape, and magic of Duwyn was fun. Simlett describes people, religions, and the land itself in detail, and I fully grasped at Duwyn being in a different realm from Earth.

The dialogue, however, felt a little stilted, and sometimes unnecessary. I like dialogue heavy novels, but if I ‘notice’ the dialogue, it feels wrong to me. Also, the relationship between Leonie and her Dad was a little strange to say the least. Backstory is offered, but the sarcastic, sometimes rude girl from the beginning of the story contradicted the caring girl with words beyond her years throughout the rest.

Korren’s character developed well, and stayed true to self, only changing when something of significance spurred the said change. I find his character is what makes me want to read book two, and I’m so glad the POV switched between Leoni and Korren, so we knew what both were thinking.

The opinions expressed here are those of K.J.Chapman and no other parties.

K.J.Chapman has not been paid for this review.